Laying the foundation stone for a photovoltaic power plant

Laying the foundation stone in Bordeaux

THIS GROUNDBREAKING CEREMONY FOR THE LABARDE PHOTOVOLTAIC POWER PLANT TOOK PLACE ON 23 SEPTEMBER IN BORDEAUX. FOR THE ORGANISATION OF THIS EVENT, THE RENEWABLE ENERGY PRODUCER JP ÉNERGIE ENVIRONNEMENT CHOSE TO USE THE SERVICES OF ATAWA.

Laying the foundation stone in a reception tent

The Labarde photovoltaic power plant, located near the former Bordeaux Metropole landfill site, is the largest solar power plant in Europe in an urban environment. JPEE worked closely with Atawa to organise the groundbreaking ceremony.
It was therefore decided to install a 150 m2 reception tent to accommodate all the guests at the event, including the mayor of Bordeaux. To optimise the space, this structure with a floor was extended by a 50 m2 awning. For safety reasons, and because the event was taking place directly on the car park in front of the site, the Atawa teams ballasted the structure. As far as sanitary facilities are concerned, the managers chose to install two dry cabins with a washbasin, mirror and plants outside the structure.

A 4 m2 podium with carpeting, skirting and stairs was set up inside the reception tent for the organisers to make their speeches. There was also a display grid for the retrospective display of the project. In addition, a lectern was set up for speakers to put their computers and speech cards.
Guests were able to sit comfortably on elegant Napoleon chairs and then enjoy the cocktail party on modern-design table tops.
As for the power supply, Atawa chose to use a 20kva generator. This was powerful enough to power all the equipment used during the ceremony. In case of need, a back-up unit was also available on site. In terms of acoustics, the person in charge chose to use a sound system that was powerful enough to ensure that all the guests could hear the speakers' speeches. Two screens were used for the presentation of the site under construction.

A comprehensive event management service for this corporate event in Bordeaux

Just over 100 guests attended the installation of the first photovoltaic panel of the Labarde solar power plant. As a partner of the event, Atawa was responsible for the supply of all the equipment necessary for the smooth running of the ceremony. It should be noted that the dedicated support for this project was completed in only 3 weeks. The entire structure was assembled the day before the event. Dismantling was carried out in the wake of the ceremony. 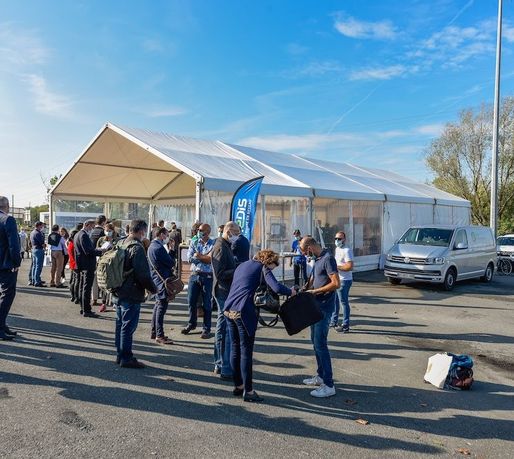 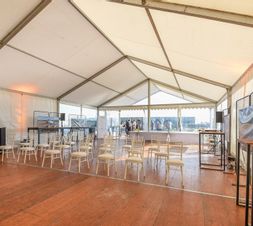 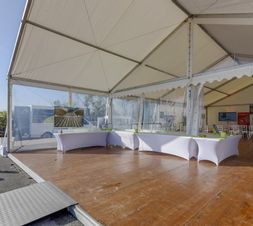 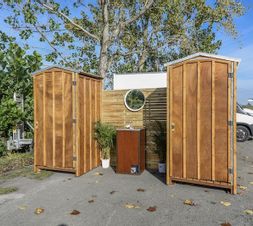 see all photos
Return to articles